Columbus, Ohio – January 25, 2022 – A member of the third generation of family ownership is the new President of Kimball Midwest, a national industrial supplier based in Columbus.

Patrick McCurdy III, who most recently was the company’s Executive Vice President of Sales and Marketing, was promoted to his new role as of January 1. 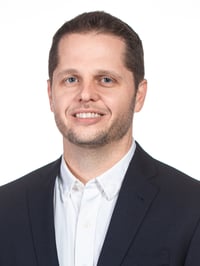 Patrick McCurdy III is taking over the day-to-day management of the organization, while his father, Chief Executive Officer Pat McCurdy Jr., retains responsibility for areas including strategy and governance.

Patrick McCurdy worked for five years at Accenture before joining Kimball Midwest in 2006. His tenure with the company has been filled with positions of increasing responsibility in a variety of departments.

“The last few years have brought many challenges and a lot of change while continuing our growth here at Kimball Midwest,” Patrick McCurdy said. “Through it all, we have worked tirelessly to maintain our culture, specifically our vision, mission, values and behaviors.”

Pat McCurdy Jr. has led Kimball Midwest since being named General Manager in 1978. In that time, the company’s sales have grown from about $750,000 in 1978 to more than $350 million in 2021. Today, the company employs more than 2,000 associates, including more than 1,200 sales representatives who service thousands of customers from coast to coast.

“As Kimball Midwest nears its centennial in 2023, I’m both impressed by and incredibly proud of everything we’ve accomplished,” Patrick McCurdy said. “From a small distributor in Central Ohio, we’ve grown into a national presence, and that couldn’t have happened without our great people doing great things every day. We are well positioned to continue living our vision to double sales every five years.”

Kimball Midwest is a family-owned national distributor of maintenance, repair and operations (MRO) products that has been providing superior products and superior service since 1923. The company services sales representatives and end-use customers from its corporate office and distribution center in Columbus, Ohio, and distribution centers strategically located in Dallas, Texas; Reno, Nevada; and Savannah, Georgia. The company will open its fifth distribution center in 2022 in Newtown, Connecticut.
<< Previous Post
Next Post >>
Have a Question For Us? Comment Here: